Today my household had to do something that owners of pets dread. We had to make the decision to end our dog’s pain through euthanasia.

How my dog supported my through the years

Odie was a very old dog, around 15 as estimated, but I had the pleasure of living with and loving him for 8 years. He chose me as his person in those years.

He slept by my side at night and helped me stay warm since I have difficulty regulating my temperature. He followed me from room to room as I moved throughout the household during the day. He was my little shadow and I will miss him. 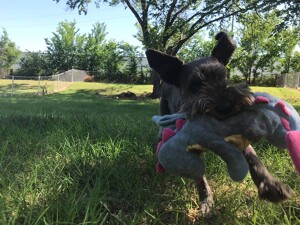 Our vet is totally accessible and she did most of the talking with us today about the process on the phone. Because of COVID-19 precautions, staying through all the testing for his prognosis was impractical.

The vet shared our grief as we ran out of non-invasive options for treating Odie. She loved him, too, and the last two years we had been through a lot together.

Odie had a few health problems as he aged but overall was still healthy and active as much as an old dog could be thanks to the vet’s great care.

She had even called colleagues about his current situation trying to find any other way to help him through his illness. The consensus was that surgery would have too difficult of recovery and his quality of life would not be there. It was our choice how to proceed.

When we made the hard decision to forgo treatment and end his horrible pain, she commended us on the most loving choice. She explained the procedure and said we just needed to let her know what time we would be there and it would be her priority to help us through it.

We wanted to get him out of pain as soon as possible, so we decided to go ahead and go within the hour. We drove to the vet.

The importance of accessibility

I was crying the whole way, and when we arrived, we were shown into a nice, accessible room that I had no problem maneuvering my chair through on any side of the exam table.

Odie was not there yet, but the soft fluffy bed they had made for him was and we laid his pillow and toy we brought next to that bed while we waited for them to bring him in.

When they brought him, we could tell he was in some pain, but he also was very happy to see us. He gave me kisses and wagged his little tail, but I could tell he was exhausted from the pain even with the medicine he was on.

I was able to roll my chair under the table to get close to him, but I had to have help putting my arm on the table so I could pet and reach him. The staff was very helpful with anything I needed. They opened doors with me and helped me run my card when I paid for everything.

Their eyes over their masks looked like their hearts were breaking along with mine. I never once felt anything but love from them as I was having to go through this hard event. They were very helpful in assisting me in the things I could not do for myself while I was there.

Saying goodbye to my dog

Once we had some private time with Odie, we told the tech we were ready to proceed. We were instructed to do once we had as much time saying goodbye as we needed.

In a perfect world, we would not have had to say goodbye and even the goodbye today would have been longer, but Odie was in pain and his meds were wearing off, so we needed them to hurry.

The vet came in and talked to us and to Odie. It seemed like she wanted just a few more minutes with him, too.

She shed some tears with us as she told us again what to expect in the procedure and asked if we were ready. She first administered a shot into his already IV-catheterized paw and it made him go to sleep.

He finally was calm from the pain he had been in, which made him very physically restless and fidgety. He was finally resting.

I stayed through the full procedure

She gave us the choice at this point if we wanted to leave and let her finish or if we wanted to stay through the whole thing. We stayed. I needed to be there at the end.

I had my hand on him the whole time as she put the final shot in which ended the procedure and he passed in so much peace that I knew we had made the correct choice.

The vet spoke with us a bit more and explained that so many people refuse to make the choice to end a loved pet’s pain and that we were an example of how people who have pets should be, that Odie was a loved and good boy and she would miss him.

She covered him up in the fuzzy blanket on the fluffy bed and when we were done, she picked him up herself and helped us walk with him out. They would take it from there and in a short time, they would call to let us know we could get his ashes.

Grateful to have been there for this moment

In hard times like this, I was extremely thankful for a veterinarian office that was accessible without issue.

I had no problem other than putting my hand on the table to reach my dog throughout this whole procedure which made it so much easier on me. I cannot imagine having to go through this at a distance unable to hold my loved pet through their last need.

I will miss having Odie at my side at night. I am not sure how life will be without him, but I still have his little brother Tucker who will hopefully grow into a dog like Odie was. I sure will miss having my shadow though.

Living My Life as a Computer

Jessie's Bucket List--What is on Yours?

0 comments
This article represents the opinions, thoughts, and experiences of the author; none of this content has been paid for by any advertiser. The SpinalMuscularAtrophy.net team does not recommend or endorse any products or treatments discussed herein. Learn more about how we maintain editorial integrity here.

Please read our rules before commenting.

Have you taken our In America 2023 survey yet?