Spinal muscular atrophy (SMA) is a genetic disorder that causes progressive (gets worse over time) muscle weakness. It is caused by a defect in the SMN1 gene, which is needed by motor neurons to survive. Without motor neurons, certain muscles do not get information from the brain and begin to waste away. In its most severe form, SMA progresses quickly in infants and leads to respiratory failure.1,2

SMA varies in severity, mostly because people have different levels of a “back-up” gene called SMN2. This gene is not as effective as SMN1, but people with SMA rely on it because their SMN1 gene does not work. More copies of SMN2 are linked to a milder form of the disease.1,2

What gene is altered in spinal muscular atrophy?

Doctors first described SMA in 1891 and defined the various types throughout the 1900s. However, the genetic cause of the disease was not identified until 1995. Researchers then discovered that 95 percent of people with any type of SMA have an altered SMN1 gene. A gene is a piece of DNA passed from parent to child that our cells use to produce a protein.1,2

The SMN1 gene contains the instructions for our cells to produce a protein called “survival of motor neurons” (SMN) protein. In most people with SMA, the SMN1 gene is altered in such a way that a whole piece of it gets deleted.3,4

Figure 1. SMA is caused by a missing or non-working SMN1 gene 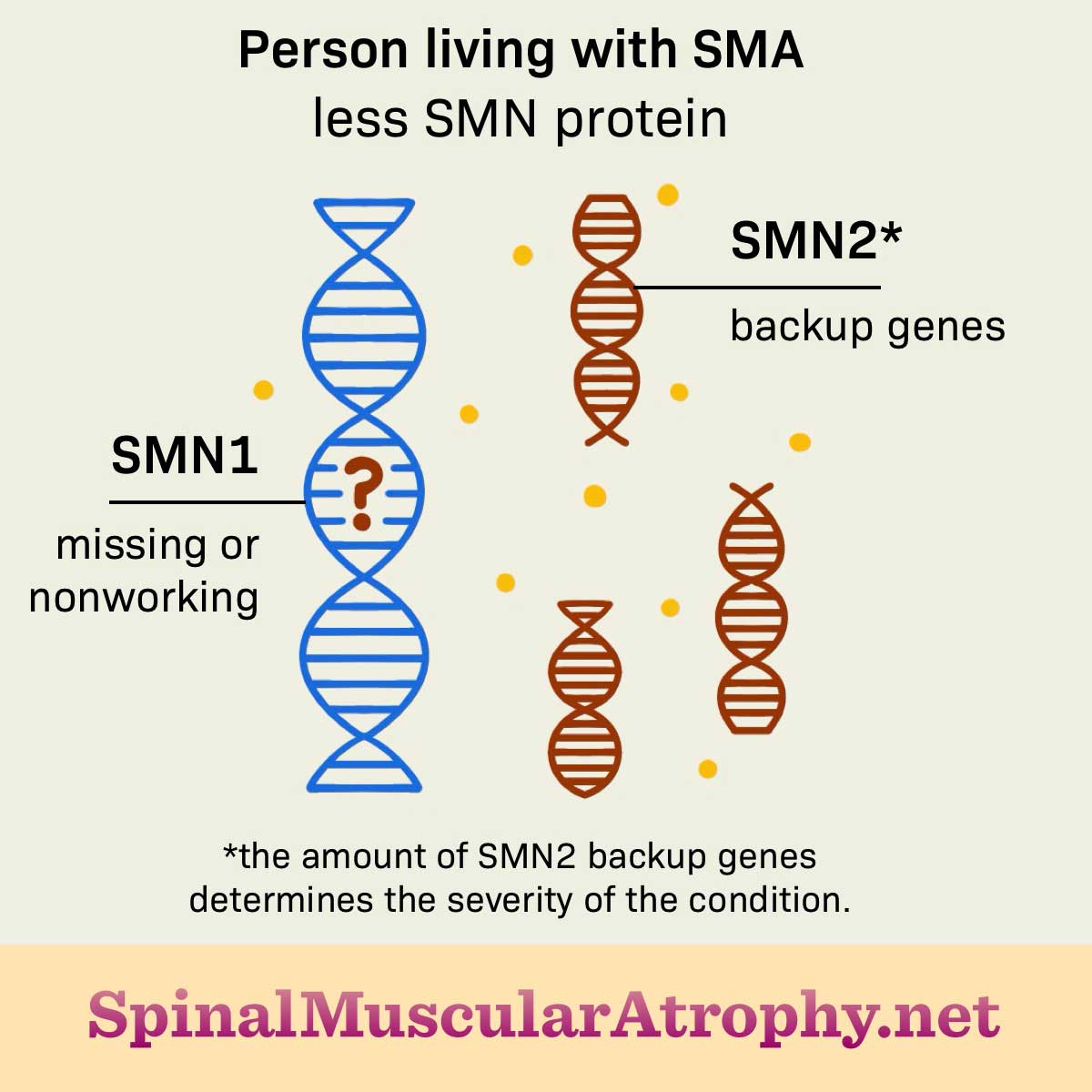 How does the altered SMN1 gene affect motor neurons?

In people with SMA, the altered SMN1 gene cannot be used to produce any SMN protein. The SMN protein is present in all of our cells but is especially important in motor neurons. These are cells in our spinal cord that control muscle movements.1,5

The SMN protein is part of a larger group of proteins called the “SMN complex.” This complex has an important function in the nucleus. This is the part of our cells that contains our genome (complete set of DNA). In the nucleus, the SMN complex helps process our genetic material in order to make proteins.1,4,6

How does the SMN2 gene make up for the loss of SMN1?

SMA types vary widely in symptoms and prognosis. Types range from the most severe type where infants can never sit to the milder adult types where people will develop trouble walking later in life. These are examples of different “phenotypes.”3,4

Phenotypes are observable traits caused by our genotype and environment. For example, height and hair color are phenotypes. The “genotype” refers to the entire genetic makeup of a person, which is associated with a certain phenotype.3,4

In SMA, a wide range in phenotypes is caused by a single defect in the SMN1 gene. This is partially explained by the presence of a nearly identical version of the gene, called the SMN2 gene.1

The SMN2 gene also contains instructions to make the SMN protein. However, it has 1 key difference from SMN1 that causes about 85 percent of the resulting SMN protein to be non-functional. This means SMN2 makes much less SMN protein than SMN1.1

Without a working SMN1 gene, people with SMA rely on their SMN2 gene to make enough SMN protein. We now know that SMA severity partially depends on how many copies of the SMN2 gene someone has. Typically, people have 2 copies of the SMN2 gene. Having 3 or more copies is associated with a milder disease. However, other genetic factors unique to each person also impact the severity of SMA.1,3,7,8

What problems does the loss of motor neurons cause?

As motor neurons begin to die, the brain can no longer control important muscles. Muscles in the arms, legs, head, and neck depend on motor neurons. These muscles cannot contract without communication from the brain, so they become inactive. As more motor neurons die and muscles become more inactive, they get progressively weaker and waste away.1,3

This affects important movements, walking, food modifications, swallowing, and breathing. In the most severe types of SMA, muscle wasting progresses quickly, and children are completely unable to sit or stand. Eventually, lung muscle weakness leads to respiratory failure. However, mental and emotional function is not affected. People with all types of SMA have normal intelligence and social functioning. In milder types, slowly progressing muscle weakness may impact the ability to walk or stand over time.4,9

Why am I Always the Party Pooper?